Home/Eroe per i Diritti Umani 2010 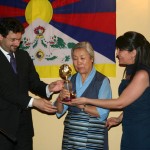 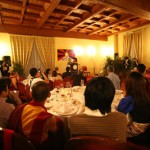 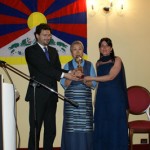 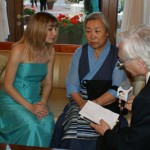 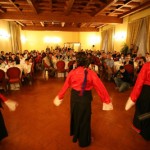 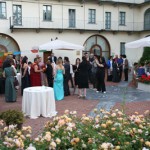 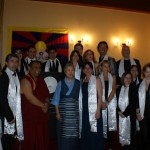 The presentation ceremony of the Human Rights Hero Award (Eroe per i diritti umani) was held in the splendid
setting of Milan’s Grand Hotel Villa Torretta today at 20.00 local time which lasted in an Italian style until midnight.
This year the third ceremony took place in Milan, having previously been held in Brussels, Geneva and at the United Nation
Headquarters in New York. The Human Rights Hero Award, an institution in Italy established by the non-profit organisation “Associazione
per i Diritti Umani e la Tolleranza” (Association for Human Rights and Tolerance), is one that is traditionally praised and characterised by acting in favour of the ratified Universal Declaration of Human Rights, a declaration adopted by the United Nations in 1948.
This year, the Human Rights Hero Award was presented to someone of remarkable spiritual intelligence, a symbol of
absolute dedication to the cause of peace, tolerance and to the incarnation of love towards children and future
generations,Our beloved Ama Jetsun Pema la, sister of His Holiness the Dalai Lama and the president of the
Tibetan Children’s Village schools,in India for 42 years from June 1964 to Aug.2006 dedicating her life to educating
Tibetan children in exile.Thanks to her tireless efforts,today the Tibetan Children’s Village has become one of the most successfully flourishing Tibetan institutions in exile.she had been the moving force and mother of thousands of destitute and orphaned Tibetan children. The children call
her “Ama La” (Respected Mother) With her dynamic leadership and untiring dedication, coupled with her sense of urgency and clarity of purpose,
The very high award was presented by the president of the Association for Human Rights and Tolerance, Mrs Fiorella Cerchiara hand in hand with the president of the Milan City Council, Hon.Manfredi Palmeri during the award ceremony.
The president Mrs Fiorella Cerchiara in her belated key note expressed herself highly inspired by the
presence of Ama Jetsun Pema la and said, ‘Mrs Pema in an extraordinary international example of someone who has a deep
respect for human rights and the unquestionable concreteness as to how they should be enforced. For us it is a
tremendous honour to help her give a voice to those who don’t have one.’

Ama Jetsun Pema la, in her acceptance speech said “This award is a true inspiration for the whole humanity and particularly
to us living in exile.our braved countrymen and women who are still undergoing great hardships in Tibet and in exile deserve
this award and i humbly accept it in their name and in their honour”.

The local Tibetans performed a cultural dance show honouring the event which is basically coordinated by the Thardoling Bhuddhist
centre of Monza who is also the co-organizer of the event. Geshe Lodoe Gyatso la,the spiritual guide of the Centre
thanked in our traditional style, the dignitaries and the special guests by offering in admiration the traditional white scarf to symbolize the long lasting friendship and in acknowledgement of their continuous support for the Tibetan cause and the Tharshul kham Zachuka school project.
Mrs Chungtak Koren,former representative of His Holiness in Geneva and Tharshul Tulku Rinpoche of sera Monastery were among the dignitaries invited to join the award ceremony.
Award Winners in the recent past editions are;
Dr Daria Pesce-International Jurist,Dr Gianfranco Rossi-United Nationa commissioner,Artist Mrs Boronessa Maria Lucia Soares,
Dr Luca Lo Presti,Argentina soccer star- Zanetti Javier,Brasilian soccer star- Marcos Cafu,
Italian soccer star- Gennaro Gattuso,Artist Alberto Fortis.
All for their immense contributions in promoting basic fundamental human rights and tolerance at various levels.